October 2014. Arthur Kemp, “March of the Titans: The Complete History of the White Race” (Ostara Publications, 2013, two volumes) arose from Kemp finding, back in 1983, no history of the white race in the university library where he was working.

There were, of course, histories of other races such as the Chinese, but white people were ignored. He corrected this omission with this big format book.

The book traces the origins of the White race from the dawn of its time until the present-day crisis.

Unlike most other history books, the book’s conceptual framework accepts the reality of racial differences and indeed sees races as making cultures and civilisations and eschews the trendy sociological view that races are a social construction. On the contrary, the social is a racial construction.

The book takes a pro-White view of our history and is unafraid to document the role played by various destructive elements in the maintenance of civilisation. Most importantly in the early pages the book notes:

In chapter 69: ‘Ragnarok – The Coming Fall of the West,’ Kemp addresses a theme long debated at this site. What can be done to save the White race? Kemp gives a number of common sense strategies. Whites must have more children: “A failure to breed is punished by Nature with extinction.” (p.663) Whites need to be awoken to racial realities by political activity in the idiom of the time. Political realism must be engaged in and the “mass media is, for the greatest part, completely hostile and in the hands of those who applaud the racial destruction of the West.” (p.633)

While all of this seems impossible, all that needs to be done is to hold on because the greatest enemy of the White race is liberals.

But as Kemp concludes “the nature of modern liberalism is suicidal. Liberals will, given enough time, destroy themselves. They will stop having children; they will miscegenate, and they will then cease to exist.”

Survival then requires pro-White activists having sufficient children and just fighting on.

He also sees the possibility of “white Russia” and Eastern Europe being the basis for an in-gathering, a new racial homeland, where Whites can hopefully, finally learn the racial lessons of history.

In conclusion “March of the Titans” is an excellent book for deprogramming white children from the politically correct brainwashing that calls itself modern education, and is a necessary read for us all, to grasp that we are fighting for the survival of our entire history.

March of the Titans review 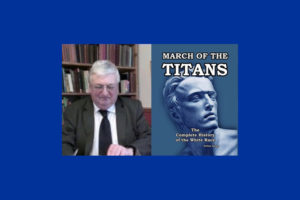 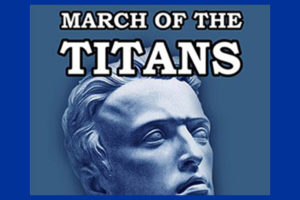